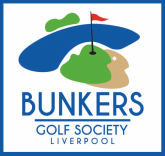 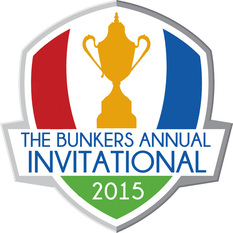 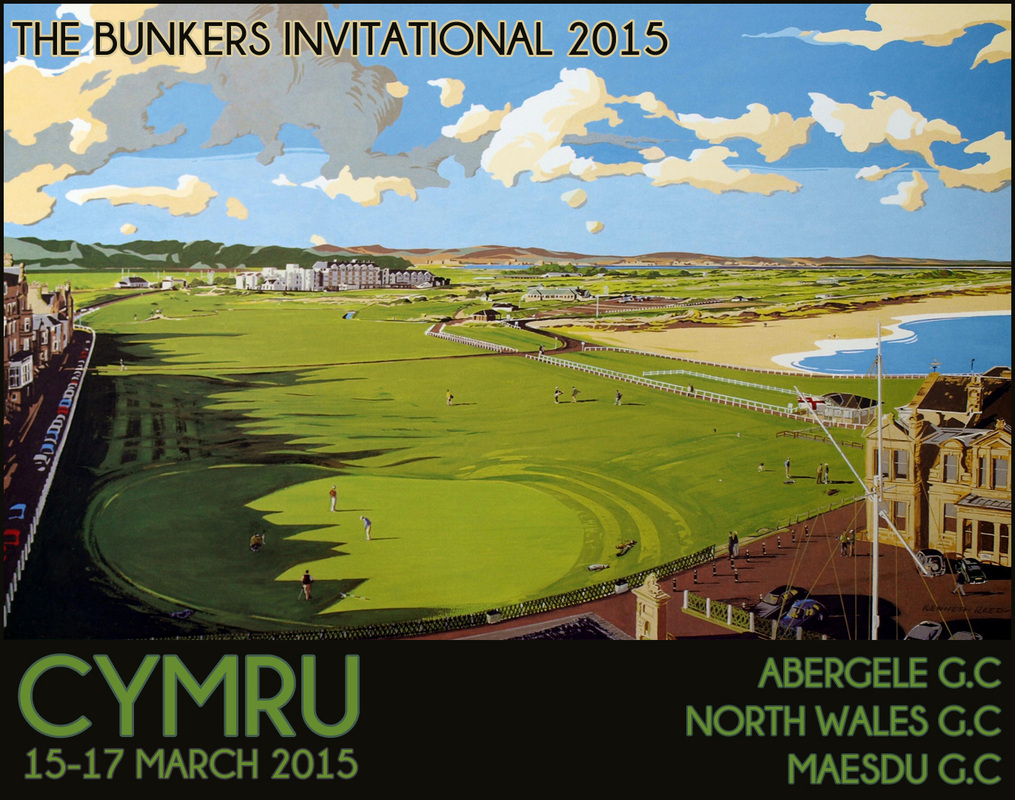 Day one was an early start for us all as we made the hour and a half drive to Abergele golf club. On arrival we were warmly met and enjoyed a full cooked breakfast. Nerves appeared to be getting the better of some players as rounds of toast and half eaten eggs were left on the plates. Looking out over the course it was clear that this was a fantastic golf club with a daunting 18th to finish. There was banter flowing from the outset and a clear understanding that everyone was taking this trip seriously. Roper had been doing his homework and was passing on his research to the Bunkers lads and there were obvious tactics being discussed on each table.

Bunkers President, Dave Ashley gave a welcoming address and it's amazing how things happen to allow seamless links to humorous anecdotes. Fortunately tee times were approaching so it was kept relatively brief!! So onto the Captains who beyond their welcomes handed out shirts to be worn on day three to both teams, kindly sponsored and provided by Teeuplo. Beanie Hats were also exchanged although by day three comments that they were cursed was perhaps not a ridiculous suggestion.

The announcement of pairings for the day's Foursomes was met with plenty of smiles and grimaces depending on who you were with and so it was onto the practice area for pre-match warm up.

The club is a great venue with the club house perched high above the first tee and 18th green. The lads crowded onto the putting green which was in brilliant condition and whetted the appetite for what was to come. Whilst this review cannot comment on each individual game or the outcome it is well worth a mention that our President topped his tee shot over the brow of the tee box and followed this up with another duff that barely cleared the water hazard 30 yards beyond the tee. We all felt the pain and crossed our fingers that we did not shame ourselves in this manner.

The course is well designed offering members the opportunity to criss cross around should they wish. Chris Smith seemed concerned that his group would get lost but 180 years plus of life experience got them round without too much trouble. The views of Gwyrch Castle certainly improve the look of the course giving an added element of grandeur, but even without this it would stand alone as a really fine test of golf. The course played long with several 400 yard plus par 4's and the par 3's being interesting and the 17th particularly having massive changes in elevation.

Come the end of the day The Grimshaw led by a couple of points with notable rounds from Tom Davies and Bobby Barrow. With that, it was off to Nuneham House to continue the evening.

Our hosts were very accommodating to 24 fellas turning up with golf bags, batteries, crates of ale and whilst basic the Hotel offered pretty much all that was needed for out two nights. Food was hot and of good standard and the ale flowed from arrival through dinner when the following days pairings for our own version of four ball Texas mixed scramble were given. Considerable thought was then given as to whether to continue on the lash or settle down and develop winning strategies on how to conquer Maesdu Golf Club. A unanimous verdict was reached.

What followed was the majority of lads fighting like little girls over the worlds last toy doll to get hold of the karaoke microphone. Some classic moments were witnessed and some not so were heard. Llandudno did us proud and the kebab place on the way home trebled its normal business.

So it was a welcomed later start at Maesdu the next day. Holmesy had written himself off at 7am declaring his wish to fly like a seagull out of the top floor window to cure his aching head but a few paracetamol and gallons of water later and we were good to go.

Some people may remember last years Miracle at Maesdu and it was clear that the Grimshaw wished to avenge that defeat and create their own memories.

The course is beautiful, the views are stunning and the mix of parkland and links quite unique. The greens were amazing, truly amazing. How anyone can create such putting surfaces so early in the year is beyond me. Total respect to the greens keepers.

The layout ensures that good tee shots are rewarded with easier second shots to the green whilst not overly punishing errant drives. The wind kept big hitters in check seeming to turn around on the back nine. Par 3's were particularly tough with two or three extra clubs required on some. The benefit of playing Maesdu on a day like this though are that when things don't go exactly to plan just look out to the ocean and realise that things could be a hell of a lot worse.

Unfortunately for the Bunkers lads things did get worse...not massively worse, but worse, and by the end of the day as the lads gathered around the 18th drinking and laughing the prospect of a Bunker's victory was looking beyond even a miracle.

That evening much reflection continued over beer whilst watching the Liverpool match. A partisan crowd it was not with a mix of Reds, Blues and even some of those nasty Manchester things. Things generally remained a lot more sensible although Kev Givnan's account of a meeting with a world class snooker player hints at a shot or two of Absinthe? Random.

By Tuesday morning it was clear that most of the lads do not get the chance or are generally not allowed out two days on the run as tiredness kicked in. Having thanked staff at Nuneham House and packed up the cars we made the short trip to North Wales Golf Club. Tiredness was quickly forgotten. All the lads looked brilliant in their respective team colours. We were so lucky to have been joined by both Today's Golfer Magazine and Andy Sullivan from Teeuplo. Photographs were taken and it was an early 9:36 tee off for the first group. As groups crossed paths around the course and word filtered through it became clear as the first group finished that The Grimshaw had taken the title.

The course sits below Maesdu and enjoys the same views but closer to the coast. It is a difficult course and with that in mind there were some really good performances. Blind tee shots, perfectly placed fairway bunkers, out of bounds and the signature par 3's at the 16th and 17th make this a very very good course. Teeuplo filmed tee shots at the 17th and Today's Golfer caught up with the groups on their way round for a natter and an insight into our great societies.

Special mention must be made about Andy Roper's hole in one at the 16th. A blind tee shot into a teacup like bowl with small green and a perfectly judged nine iron sent it rolling in. Totally deserved for the effort put into both his golf and organising such a fantastic event and Bunkers events generally.

By the time the last group reached the 18th it was over. A deserved win for The Grimshaw.

Bunkers lads were summonsed back to the 17th tee for a final photo call with Today's Golfer.  Looking out from that elevated tee with a view across the bay, with that backdrop having played three days of superb golf with a great bunch of lads, a perfect end to an unforgettable trip. I really hope we do the photo justice.

CLICK ON EACH DAY TO SEE THE INDIVIDUAL WEBPAGE

all places for this trip are taken. sorry.

whats included for the price?

- 2 nights stay at the Nuneham House Hotel in Llandudno
- 3 rounds of golf [inc food/snacks before or after]
- Dinner, Bed & Breakfast at the hotel [which is only occupied by ourselves for the duration of the trip]
- Ryder Cup style format against "The Grimshaw Golf Society" from Skelmersdale

If you want to venture further afield, the hotel is situated right on the promenande near to the main area of bars.

See some of the bars in Llandudno CLICK HERE

The Grimshaw will be hoping to wrestle this back in 2015 and it should be another superb 3 days of golf on the beautiful coast of North Wales.Best of luck to all the lads who are taking part and we look forward to another great trip.